Manu Grace unlocks freedom and femininity through her sensitive pop music. The South African songwriter, multi-instrumentalist, and vocalist appeals to both the heart and feet through her groovy and unguarded sounds.

Grace’s breezy EP No Room For Error was released in October, produced by Ross Dorkin and Robin Brink (Beatenberg). It was written following a life-altering summer under the Tuscan sun that saw her tumbling head-and-heart-first into love and loss. But, it eventually led her to a much stronger sense of self, which Grace shares through her seven-track sophomore effort.

“This record taught me to trust my instincts and to trust the muse. The songs always arrive, if you’re open to receiving them. I approached the process with a strong sense of freedom and fearlessness - no idea was ever too wild, and I really love working like that,” Grace spoke of the process on her Bandcamp page.

For her Algorhythm, Grace talks about how Lykke Li inspired her to start writing her own songs.

As a kid, the music I had access to was limited and came from very varied sources. With the exception of Les Miserables (which I took out and renewed countless times from the local library), the music that landed in my lap was generally in the form of hand-me-down CDs.

I had very severe screen restrictions growing up (for the sake of my imagination), and being in South Africa, all of the latest global developments were slow to reach us. I missed the MySpace era entirely. Even YouTube remained a mystery to me until late into my teens. The Internet dialing tone isn’t as distant a memory as it might be to my peers in other parts of the world. Thus music discovery was largely a matter of chance and I was exposed to a real wack mix of genres.

From tiny, I always felt disdainful about the stature that boys seemed to hold in the world. In fact, I insisted that I was one for a large portion of my early childhood. It seemed the obvious solution. This disdain continued into my teenage years: I’d always known that I wanted to be a musician, but all the artists that I was listening to and that I considered to be ‘cool’ were male. I had this pervading fear that nobody would be interested in listening to my voice, because I was a girl. Then my high school boyfriend introduced me to Lykke Li (on a mix CD, naturally). That changed everything. It was my first access to a contemporary female artist making alternative music. It was around that time that I started writing my own songs.

You can listen to Manu Grace’s No Room For Error EP on Bandcamp and the full Algorhythms playlist here.

Looking for your own musical inspiration? Grey Matter is the music community where music and people meet. Grab the app and come hang out. 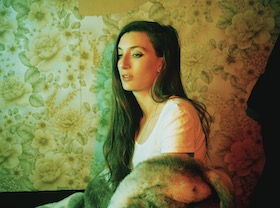