“There’s been a washing away of that cultural element in music discovery online…there’s no sense of authorship as a fan, and there’s no interaction with the artist.”

Andrew Fox is a musician and songwriter out of New York. Outside of NYC, he’s also spent stints in Berlin and Paris, and in his music, the energy of the Berliner techno scene and that romantic Parisian charm are nearly as present as the Brooklyn indie aesthetic that surrounded him when he was coming into his own in the mid-2000s.

Before his most recent record, Shock by Shock, Andrew released music under the moniker, Visuals. The first Visuals EP was produced by Dave Harrington and Nicolas Jaar (together, Dave and Nico make up the band Darkside). The three of them went to school together and remain friends. Andrew’s also released music on Nicolas Jaar’s Other People label and he opened for Darkside in Berlin on their first tour, deejaying the main room of Berghain, the infamous techno mecca.

We chatted about the artist communities that became his foundation in New York, as well as how the depreciation of music journalism and lack of social tools are negatively affecting online communities. Lots of great tunes throughout, and some insight into Andrew’s next release, too.

Listen on SoundCloud below or on Spotify here.

Special thanks to Alexander Frieden for the editing support!

Want a sense of authorship? Check out our beta. 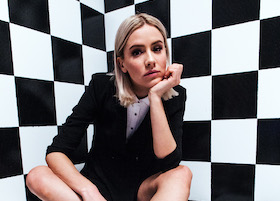